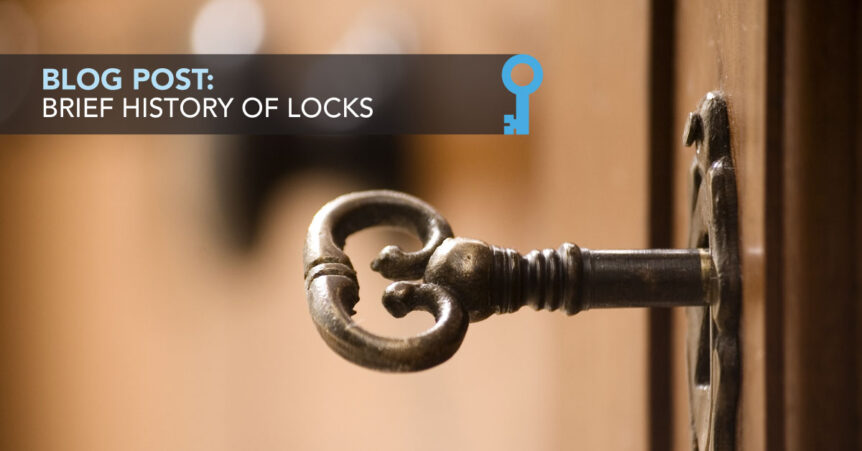 Locks, keys, safes are all necessary to our lives today. Having your local Calgary locksmith’s contact information included in your Contact Manager is important. As humans, we will lock ourselves out at times. This makes having your experienced locksmith number handy less stressful. Whether the lock is for your home, automobile or commercial building it is a necessary fact of everyday life just as the world round. So, when were locks first used and what were they like?

Centuries ago, securing a building could take the form of a plank across the castle door – we’ve all seen that in the movies. Getting locked out meant a damaged door unless someone was on the other side – no calling your local locksmith. Ropes with knots were used just to tell if the building had been entered but did little to keep out the unwanted.

According to several sources, the earliest discovered lock and key was found in the middle east, Nineveh – dating back to 4000 BC. Only the very wealthy would have bothered to have locks. It comes as no surprise this discovery was at the Palace of Khorsabad. The type of lock was a pin tumbler made of wood.

“Modern replica of an Assyrian pin lock. The backplate would be bolted to the outside of a door. The paddle-shaped object is the key, which is inserted into the bar and pushes up the pins, allowing the bar to be removed” – Source Gates of Nineveh

The Egyptians added the use of brass pins which made the lock stronger. Greeks added more metal parts to the lock. Romans made a similar lock but smaller to be used on chests of drawers (early safe). The basic pin tumbler had very little change until the middle ages.

The first all-metal ‘warded lock’ (one that used obstruction to prevent the lock from being opened without the proper key) was created by an Englishman. This was the first lock with a keyhole and patterned wards to block just any key opening the lock. This was an improvement but as you may have guessed, it led to the ‘skeleton key’. Useful for a landlord or hotel owner, but handy for thieves.

As populations moved into the city and more people became wealthy, better locks and more secure methods were needed for buildings. By 1778 Robert Barron had patented a double-acting lever tumbler lock. Today’s improvement in security for our homes and businesses continues. The need for this business led to the modern locksmith.

We now have keyless entry systems, high-security locks, and so many more opportunities for a safe secure home. Each situation requiring enhancing safety and security to your home or business will be different. Knowing your local Calgary locksmith gets you started in the right direction. Trust, experience, knowledge, Calgary Rekey Lockworks. Call us 403.202.7656.